Pathetic! These clowns are semi-religious frauds!!

I doubt it! But I am sure he and his comrades have read the “Communist Manifesto“,  Saul Alinsky’s “Rules for Radicals” and Hitler’s “Mein Kampf”! All of the filthy Communist Democrat Progressive Trash have—and it is what they have no problem living by!

The Bible is a prop for the Democrats. The Cuomo Brothers are a triple threat. They are Communist Democrats merely Religious. Catholics do not study the Bible. They get their understanding of the Bible fed to them by a Homosexual Priest who tells them what to believe. This is theatrics just like we have seen from  Nasty Nancy Pelosi. These frauds just can’t stand to have the President make them look like the children the Devil, which they are. So, they pick one up now and again to put on a show!

John 8:44 “Ye are of your father the devil, and the lusts of your father ye will do. He was a murderer from the beginning, and abode not in the truth, because there is no truth in him. When he speaketh a lie, he speaketh of his own: for he is a liar, and the father of it.”

And the above commentary is not just about the Devils Children in New York, NO!. It is the same all across America and the whole world!

From Breitbart News – New York Gov. Andrew Cuomo on Wednesday read the Bible at the opening of his press conference, in an attempt to needle President Donald Trump.

“The president held up the Bible the other day in Washington, DC,” Cuomo began as he held up a copy of the Bible. “Here in New York we actually read the Bible, and there are some passages that I think are especially appropriate today.”

Cuomo quoted several passages from Scripture, opening up a copy of the Bible and reading the quotes off of a series of slides, rather from the text itself.

“Blessed are the peacemakers for they will be called Children of God,” he quoted from the Gospel of Matthew. 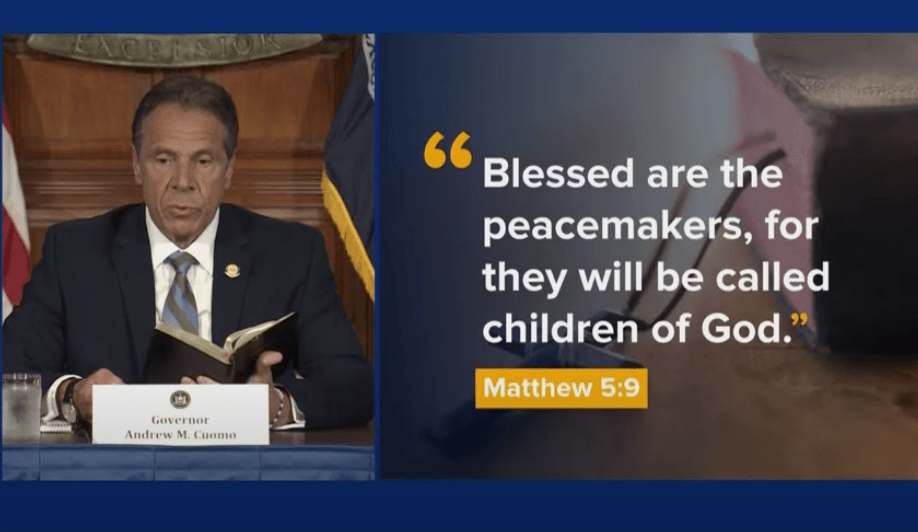 “If a house be divided against itself, that house cannot stand,” he read, noting that it was in the Gospel of Mark, “before Abraham Lincoln.” 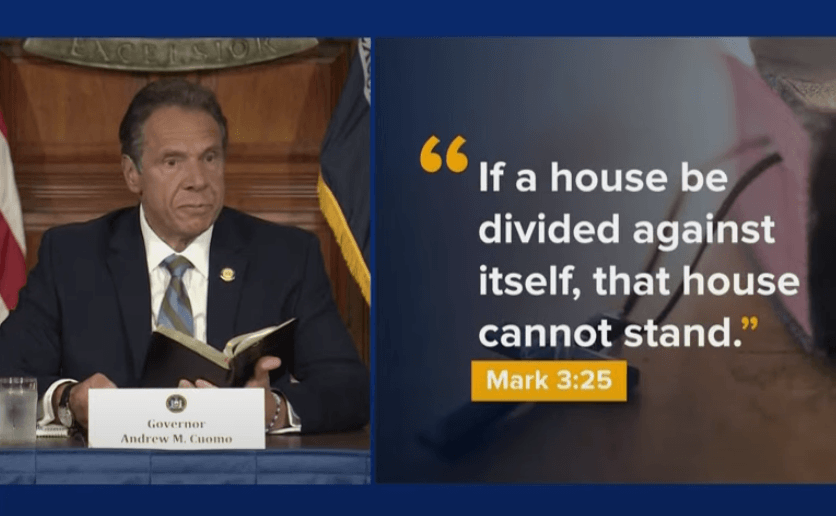 “Turn away from evil and do good. Search for peace and work to maintain it,” he read from the book of Psalms. 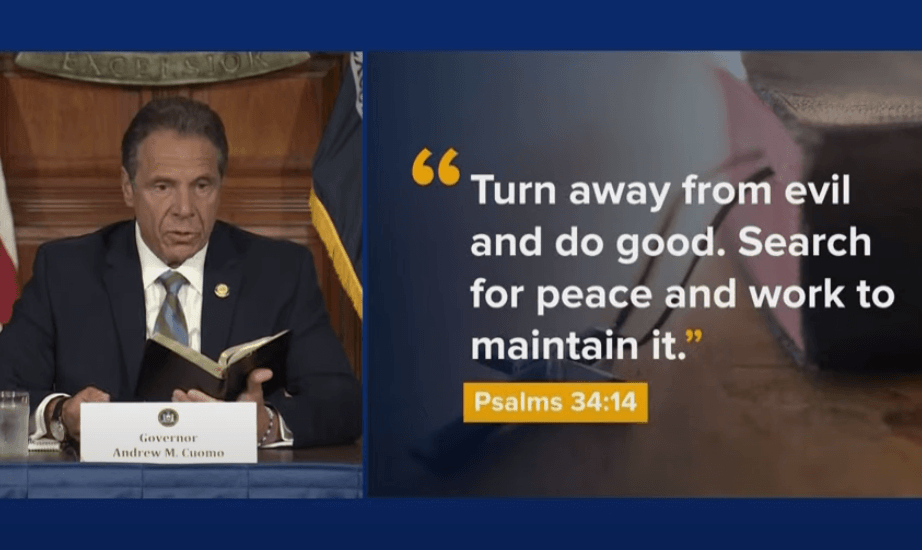 “The seed whose fruit is righteousness is sown in peace by those who make peace,” he read from the letter of James. 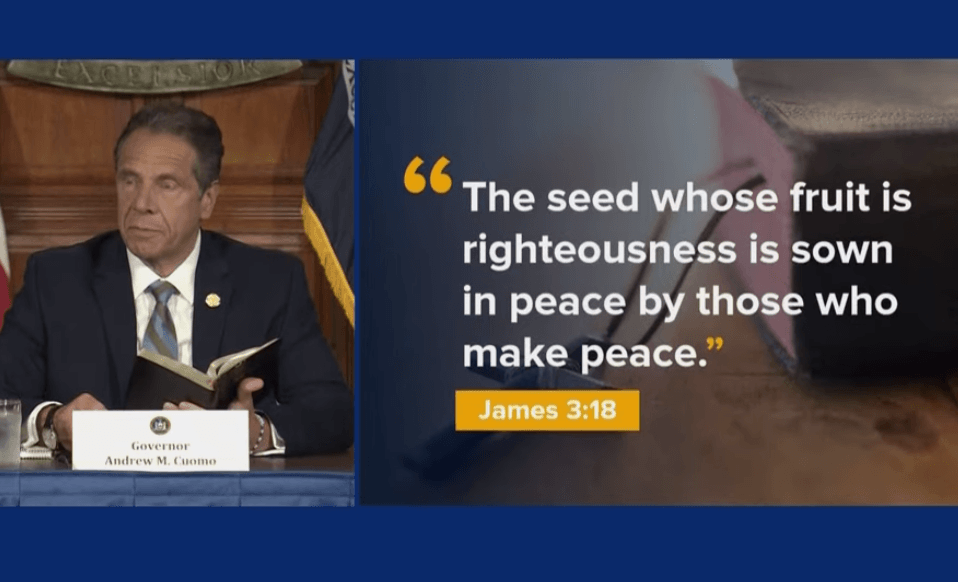 “I think those words are all appropriate for where we are today,” he said, before resuming his press conference. Read more here

Satan knows the Word of God very well, as do most of his servants.  The most evil people in the world study the bible intently.  They search it for clues as to what is coming, and they build their schemes around it.  They select phrases that are easily perverted to support their agenda, and use them to coerce and control people.  Evil beings very often quote scripture as a means to justify their actions.

Satan used it in the Garden of Eden and successfully caused the fall of mankind.

Satan used the Word of God to try and prevent Jesus from going to the cross to pay the price for sin and provide salvation.  He obviously did not know that Jesus WAS THE WORD incarnate.

Matthew 4:5-6 “Then the devil taketh him (Jesus) up into the holy city, and setteth him on a pinnacle of the temple, 6 And saith unto him, If thou be the Son of God, cast thyself down: for it is written, and in their hands they shall bear thee up, lest at any time thou dash thy foot against a stone.”

Satan was quoting out of Psalms 91.

Andrew Cuomo employed the same trick in his speech quoted above.  It is easy to find justification scripture for anything under the sun when you do not KNOW God.  The true intent of the scripture can only be understood by those who know and love GOD.  Liars and manipulators pervert the true meaning of the Word to suit their purposes, and lost souls are easily fooled. One should be able to tell by his actions that Cuomo is not a man of GOD so his use of those scriptures is at best insincere.  He couldn’t care less what GOD has to say.  Just like Satan, Cuomo, Pelosi and others like them, twist scripture, to try and make themselves look Holy!

It never ceases to amaze me that even those who openly declare that they do not believe in GOD so often throw scripture out to defend their actions.  If you really don’t believe in GOD, then why should you even look at scripture, let alone quote it?   Why? Because it works.  The WORD of God brings conviction, sadly though, those who do not know GOD can misinterpret that conviction and it can be misapplied.

There is an agenda working its way through the nation’s churches today.  Since 2006 Pastors have been enlisted in a sinister plot to use the Scriptures to force bible believers into compliance with the New World Order.  This is not a new tactic. It was employed by the NATZIs and it worked like a charm.

On March 21, 1933, Germany was in turmoil. Less than two months after the Nazi seizure of power, even people with pro-regime leanings felt disquieted about the draconian measures instituted since the end of January.

It was in this context that Protestant theologian Otto Dibelius invoked the biblical passage Romans 13 to urge Germans to support Hitler. As the nation looked upon him that day, in his sermon in front of the newly elected members of the Reichstag (parliament), Dibelius told Germans that they had learned from Martin Luther that Christians may not fail to support the state, “even not when [the state] acts hard and ruthlessly.”

In his sermon, held in Potsdam, Dibelius reminded people how, during his own days, Luther had called upon state authorities to act “without mercy” to restore order.

It was  the “Day of Potsdam” that saw the marriage of the old Prussian establishment with the Nazi regime, symbolized by Hitler’s famous handshake with German President Paul von Hindenburg — that Romans 13 was invoked.
Throughout the lifetime of the Third Reich, in tens of thousands of sermons up and down the country, pro-Nazi Protestant pastors quoted from Romans 13: “The authorities that exist have been established by God. Consequently, whoever rebels against the authority is rebelling against what God has instituted, and those who do so will bring judgment on themselves.”
In short, as the Nazi regime imprisoned its opponents and wrought havoc across the world, Romans 13 became one of the glues that held the Third Reich together.
The scripture had the effect of preventing, or at least delaying, the emergence of more widespread resistance against Nazi policies. The powerful writings of anti-Nazi Protestant theologians Karl Barth and Dietrich Bonhoeffer are testament as to how much Protestants in Germany were battling with what the particular verse.
For instance, in his book “Church and State,” Barth discussed at great lengths how Romans 13 calls upon Christians to obey the rules of the state they live in, however concluding, in effect, that the actions of Jesus himself contradicted the narrow reading of Romans 13 favored by the Nazis: “Christians would, in point of fact, become enemies of any State if, when the State threatens their freedom, they did not resist, or if they concealed their resistance — although this resistance would be very calm and dignified. Jesus would, in actual fact, have been an enemy of the State if He had not dared, quite calmly, to call King Herod a ‘fox’... If the State has perverted its God-given authority, it cannot be honored better than by this criticism which is due to it in all circumstances,” Barth wrote.
Barth thus ultimately concluded that Romans 13 does, in fact, not call upon people blindly to obey the state. Quite to the contrary, according to Barth, Paul’s epistle to the Romans requires people to rise against the state when the state is the source of injustice.

Is Your Pastor a FEMA Pastor?

Of all the people in the world you can trust to tell the truth, you would think it would be your Pastor. They are supposed to be the shepherds of the flock, but are they? Or have they sold out to the New World Order? Please don’t get me wrong. I am sure that many Pastors take their position very seriously and speak the truth to their flock, but not all of them. Many of them will be used to help “control” their flock when Christians are led away to FEMA camps because they are enemies of the “State”. You may be saying that this could never happen. Well, it can and probably will. As Obama said “We are no longer a Christian Nation”. When true Christian organizations are being called “domestic terrorists” you know that anything can happen.

“Over 26,000 U.S. Pastors are preparing Congregations from Evangelicals to Roman Catholics and every one in between to obey the government at all cost, no matter what during any coming catastrophe. These orders would include but are not limited to:
– Gun Confiscation
– Forced Vaccinations
– Forced Relocation
These Pastors are also be trained who the potential “Domestic Terrorist” which include Gun Owners, Libertarians and those who would oppose Government Tyranny and Control…”

“A large church organization has refused to divulge how many of its pastors are on the FEMA payroll, after a member expressed concerns about religious leaders being used to condition their congregation to accept the declaration of martial law.”

As you can see by the age of a couple of these videos, this has been going on for a long time, but that doesn’t make it any less relevant today. In fact I think it is even more relevant now than then.